How I Got Into Weaving – Cathryn Amidei 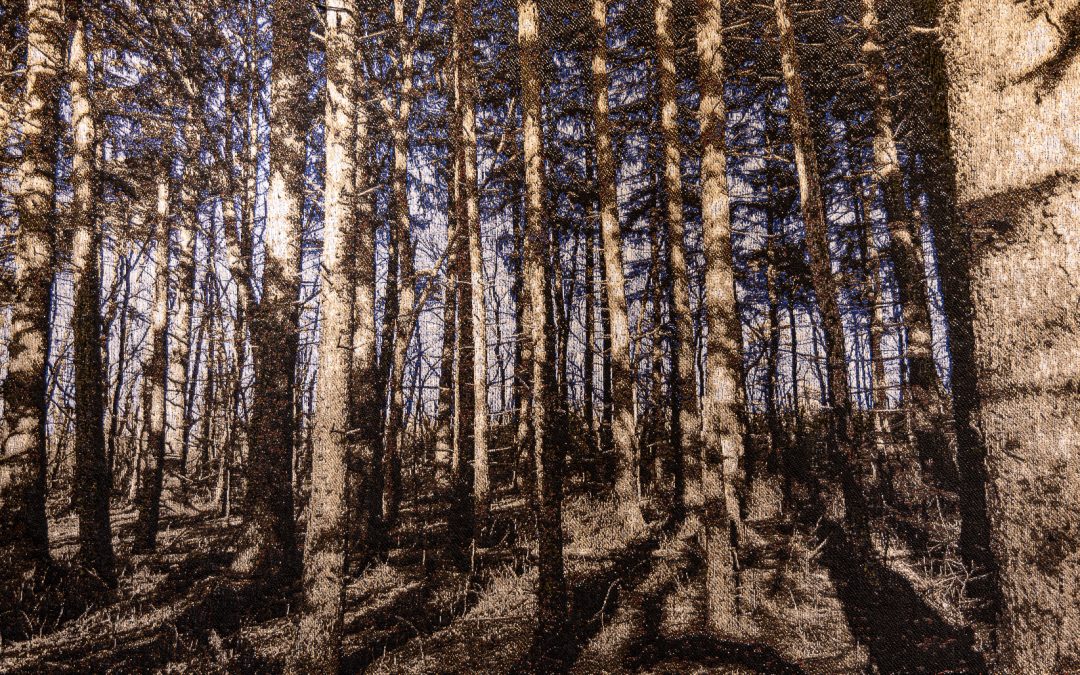 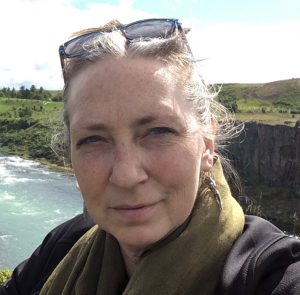 BACKSTORY: Cathryn is an awesome jacquard weaver. We first connected through Complex Weavers and Pat Williams who had been Cathryn’s graduate advisor at Eastern Michigan University and who was a friend of mine through my acquisition of an old industrial jacquard loom (another story!). Cathryn was also a friend of Bethanne Knudson and I think introduced me to Bethanne. In any case, our paths have intertwined since then, including a lovely family visit to my home and studio in the UK some years ago to meet ‘Hattie’. Cathryn is known to many weavers worldwide through her work with Vibeke Vestby and Digital Weaving Norway & US, delivering workshops and practical advice to students and staff in university campuses, conferences and seminars for TC-1 and TC-2 looms internationally. In addition, she runs The Jacquard Centre in Henderson, North Carolina, US. Here is her story:

HOW I GOT INTO WEAVING:

I declared myself to be a weaver long before I even knew how to weave. I think I have the kind of brain that is always trying to figure out the “essence” of things. When I cook for example, I usually consult more than one recipe. I need to feel the dimensionality of a thing in order to understand it.

The kind of weaving I do now was not really by choice.  My graduate advisor Pat Williams at Eastern Michigan University got a TC-1 for the program.  As her assistant, I had to learn how to maintain the loom. I remember feeling a kind of affinity for this machine right from the beginning. Then there was the 9-day intensive course that challenged me more than any other class I have ever taken. Bethanne Knudson was the instructor.  When I fight for something, I never let go. 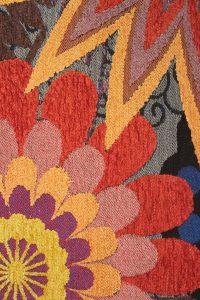 Lately, I have observed myself engaged in a dialog with my loom and the matrices that we have built together.  This dialog has slowly woven itself into a structure that reaches outward, extending beyond my studio, embedding itself into ideas and experiences and becoming a way of thinking about every thing and every non thing.

I have been weaving now for about 22 years.  I have been weaving in Jacquard technique for about 18 or so. The jacquard type loom that I use – the TC2 – enables every thread individually.  This results in direct access to every interlacement, and every interaction in the matrix. Having devoted myself almost entirely to the pursuit of understanding what this can mean, I can say that I have been transformed by this journey – resulting in an understanding about the connectedness of all things.

For me, weaving is the most real thing. This dialog I have referred to is a result of the purposeful pursuit of my craft and this instigates and nourishes the dialog.  The matrix is everywhere, dependable, surprising, inescapable.  Pull on one thread, the impact is seen, miss one interaction, the result is recorded. There must be room made for all, or the result is an imbalance, a distortion that weakens the structure.

The images that are labored over are as much about what is seen as they are about the structures that brings them into focus.  The yarns and their paths define the nature of the thing that is becoming cloth – a single whole.

Like me. Like us, these bits and pieces, and lines and paths, appear as a unified thing but are in truth, never solid. The matrix has content, volume, a history, and a future as a result of act upon act until the line is cut.

This dialog I have been engaged in is also about motion, the thing is always in motion.  I am in motion, in thought, and deed, and the object is in motion as it is perceived and labored over in process and finally as an object off the loom.

While I am slinging shuttles, my thoughts move outward and away from the places and spaces they occupied during the preparation and transition of images from pixels of light to interlacements in the matrix, to trajectories in space. 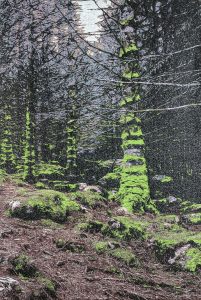 I am learning, and changing, taking instruction as the wefts slide into place. What can I accept? in what ways can I bargain, gain ground, or cede territory?

I cannot help but observe how this concept relates to the way objects and systems operate, the way water, movement of trains, planes and automobiles, the migrations of animals, and humans  crawling, walking and running, all things in motion – moving thru space, and all with a certain circularity.  These motions match the circulation of my shuttles, the warp threads bending over the back beam, the cloth rolling forward toward the earth at my breast.

There are trajectories everywhere all the time.

The thing that I have learned from being true to my craft is that it connects me to other truths. Beautiful, ugly, truths that I ignore or avoid, truths that I cannot name and do not know. The systems I understand when I weave, re-collect me into some other whole where the systems that order and provide space for our lives reside. Material and my engagement with it has taught me things about how we all are.