How I Got Into Weaving – Robyn Spady

by StaceyHB | Aug 22, 2021 | Education, How I Got Into Weaving, Life, Publications, Teaching, textiles, Weaving | 0 comments 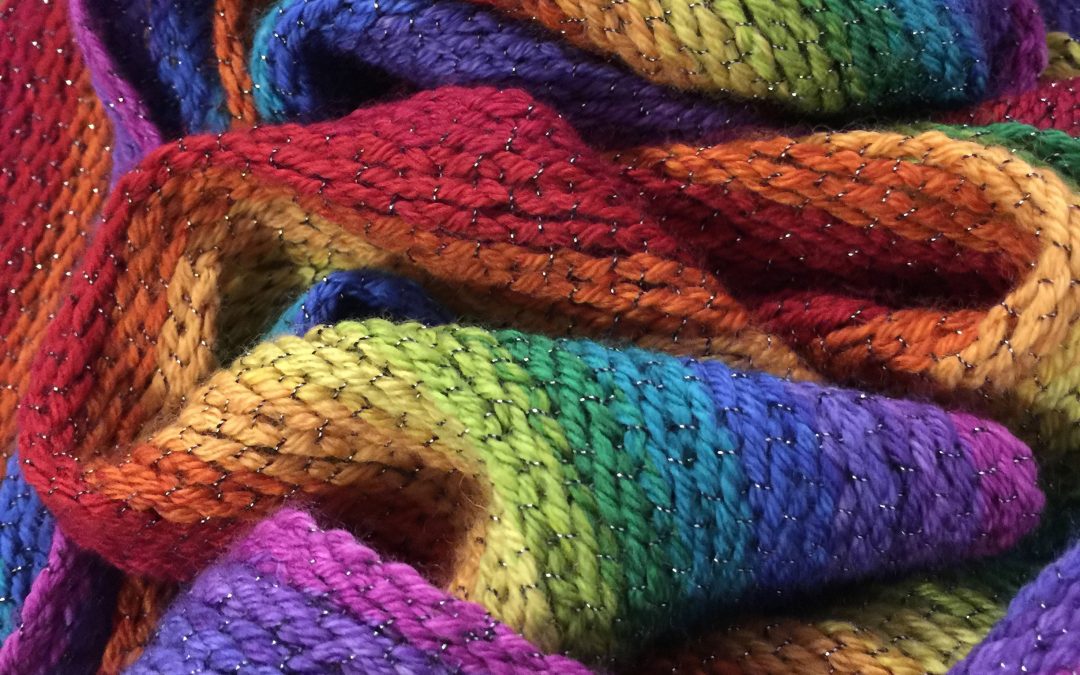 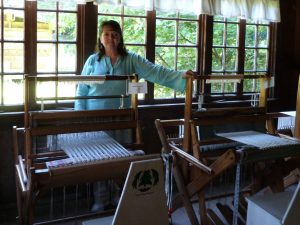 BACKSTORY: I must have met Robyn during the very first Complex Weavers Seminars I attended (2006) because we have been weaving soul sisters for a long time! She has a brilliant sense of humour and also was my inspiration to learn stitched double cloth for texture with her HGA’s Certificate of Excellence in Handweaving piece of a loom-controlled stitched double cloth hand muff which is just gorgeous. She is a real mine of information and teaching skill for all weaving levels, and her many students speak very highly of her. Among her areas of special interest, she loves to explore double-faced fabrics, lace weaves and passementerie! She is the founder of Heddlecraft, an online weaving magazine which focuses mostly on four and eight shafts, although catering for weavers with more shafts as well, which gives a very solid grounding in all aspects of our wonderful craft!  A trip to Complex Weavers Seminars is just not the same without spending time with Robyn, sharing a glass of wine (or two) and having a good laugh!! Enjoy her story into weaving!

Weaving has always been a part of my life.  The baby blanket wrapped around me shortly after I born was handwoven by my great-grandmother, known as Vovo.  It was a pink and red plaid wool blanket.  I cuddled under it for many years.  Carried it with me when we went for car rides.  The corner was singed when it encountered a fire burning in the living room’s fireplace.

My great-grandmother passed away before I was two years old.  Even though I don’t have any memories of being with her, there are many family photos that show us together.  What was fortuitous was my father inheriting her loom – a 30” wide four-shaft counterbalance loom made by the Payton Loom Company in Portland, Oregon.  It remained folded and covered in my parent’s garage.  My brothers and I would occasionally lift the cover to look at this curiosity.  I was fascinated by it. 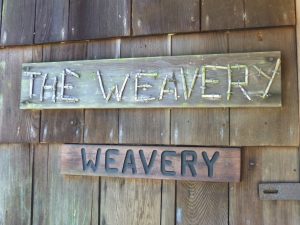 As a child growing up in Portland, OR I would attend Camp Namanu for one week every year.  This was a Camp Fire Girls camp in Sandy, OR about an hour outside of Portland and near the base of Mount Hood.  In addition to learning silly camp songs, making campfires, and slumbering each night in open-air cabins in sleeping bags, each age group had a variety of activities to participate in during the week.  In 1969 one of the activities available for my nine-year-old age group was weaving.  I immediately thought “That’s for me!” and jumped at the chance.

I thought we would be provided a piece of cardboard with notches cut on two opposing sides and strung up with yarn and we would do something akin to tapestry weaving with twigs, grasses, etc.  You know . . . camp stuff.  Imagine my surprise when I arrived at The Weavery and laid my eyes on a collection of four-shaft counterbalance floor looms exactly like the one in my parents’ garage.  Each of us got to choose a loom.  Every loom was warped with a cotton warp and threaded with a different overshot pattern.  We were going to weave a fingertip towel with an overshot border at each end.  We were told to choose a color for our overshot border pattern.  I chose orange. 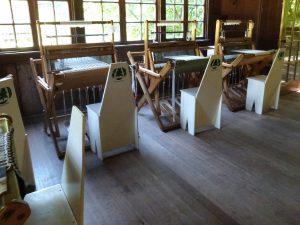 The director of The Weavery instructed us how to treadle and weave plain weave.  Each of us commenced weaving our fingertip towel in the simplest of ways.  We were instructed to weave a couple of inches and let her know when we had achieved that.  From the very beginning, I was hooked.  I marvelled at watching how each weft pick interlaced with the warp.  When I finished weaving a couple of inches, I was then shown how to weave with two shuttles – one for the orange pattern I had chosen and the other for the tabby.  The satisfaction I felt watching my overshot border develop was thrilling.  I was in heaven for the rest of the day weaving my overshot border fingertip towel.

When I returned home with my handwoven fingertip towel, I showed my mother and proudly proclaimed “I know how to weave on Vovo’s loom.”  Immediately my mother and I moved my great-grandmother’s loom into a corner of the family room and unfolded it.  My mother also brought out a box of items I had never seen before.  It was like Christmas morning pulling out the shuttles, bobbins, and books.  She also brought out the warping board.  I look back on this as validation – handweaving was my destiny. 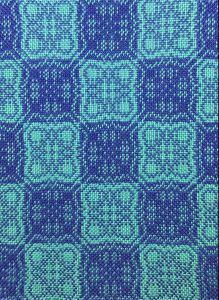 Even though I learned the mechanics of weaving at Camp Namanu, I didn’t know much more than how to read a treadling sequence and throw a shuttle.  Among my great-grandmother’s belongings was a copy of Marguerite Davison’s iconic book, A Handweaver’s Pattern Book.  I would sit for hours studying the drafts.  Years later my mother would tell me she was intrigued that I could sit for hours staring at the pages of the book without turning a page.  This was the next step in my weaving education – seeing how the threading, tie-up, and treadling worked together to create different patterns.  I was introduced to weaves beyond overshot.  That is when my love of lace weaves began.

I fumbled along weaving on my great-grandmother’s loom.  My weaving looked mediocre since I understood little about sett.  But I was still captivated.  Then came high school.  In 1974 I started high school at Woodrow Wilson High School in Portland, OR.  I remember my first day walking past one of the art rooms on the second floor.  The large windows provided a look inside to a room filled with 15 floor looms.  Fourteen of the looms were the same kind of loom as my great-grandmother’s loom.  The only difference is the looms varied in width from 24” to 45”.  It felt exciting and familiar at the same time.  I was to learn my high school had a robust fiber arts program.  I signed up immediately! 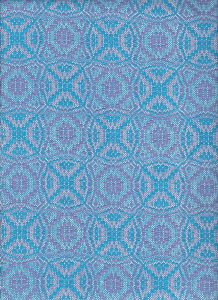 Elizabeth Borden, one of the art teachers at my high school, taught painting, drawing, book making, and fiber arts.  To weave on one of the looms, we had do complete an individual sheep-to-shawl project.  We had a fleece for the class. This is when I learned to prepare, card, and spin yarn.  We had to dye the yarn we made using natural dyes.  I used onion skins.  I then had to make something with it.  I ended up crocheting a guitar strap.  I had passed the first phase.  I would now be allowed to weave on one of the looms.  My first project was a double-width woven blanket on one of the 45” wide looms.  After that project I became one of the weaving teaching assistants.

I spent a great deal of time throughout my four years of high school happily entrenched in the fiber arts.  A great deal of each day was spent teaching other students how to spin, read drafts, warp looms, and weave.  I also dabbled a bit in basket making.  But I knew my first love was weaving.  This was what I wanted to do with my life.

In 1980, two years after graduating from high school, I returned to Camp Namanu as the director of The Weavery.  Every week that summer was my turn to inspire and teach the campers that had chosen weaving as one of their week’s activities. 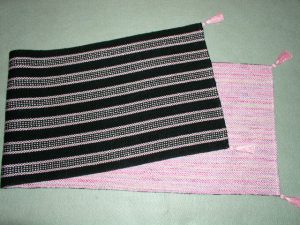 My parents frowned upon my desire to making weaving my profession.  In their opinion, handweaving was little more than a hobby and not something to be taken seriously.  I finished college with what was looked upon as a pair of ‘acceptable’ bachelor’s degrees.  I then went on to graduate school and then joined Corporate America.  I spent nearly 20 years in high tech, mostly as a management consultant.  I hated it!  But, throughout that time I continued to weave.  In early 2001 I had the opportunity to escape Corporate America.  It was then I could devote myself completely to weaving.  My life has never been more satisfying since then.

A couple of years ago, I returned to Camp Namanu during an open house.  The Weavery is still there.  Every summer, campers continue to learn to weave.  A circle of life continues.