How I Got Into Weaving – Belinda Rose

by StaceyHB | Apr 11, 2021 | Education, How I Got Into Weaving, Jacquard weaving, Life, Teaching, textiles, Weaving | 0 comments 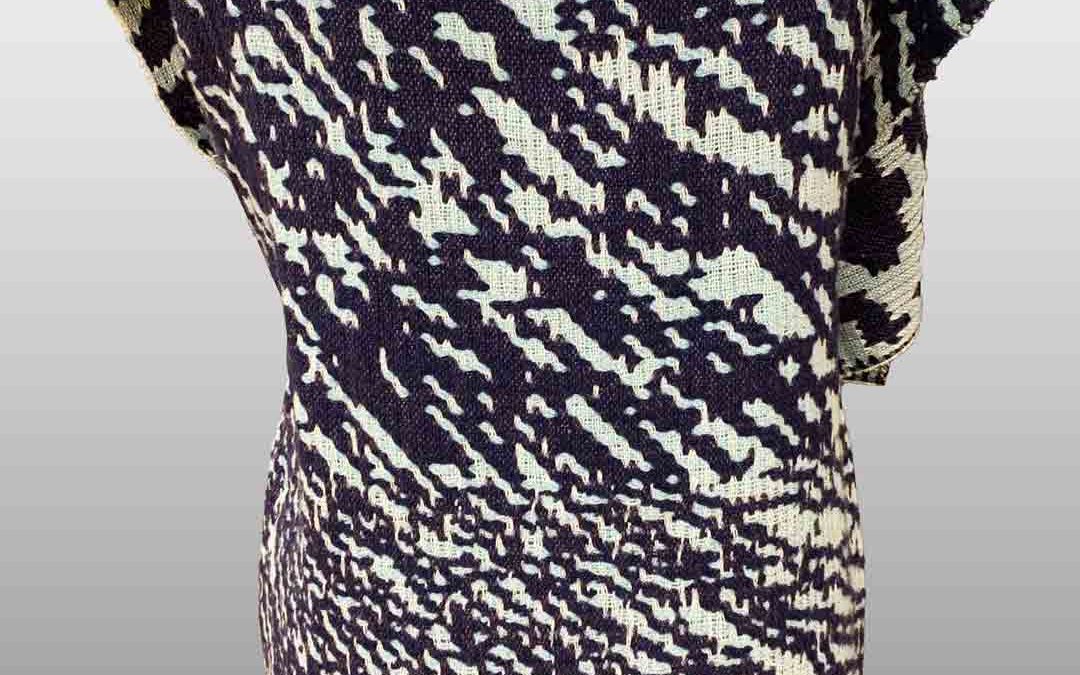 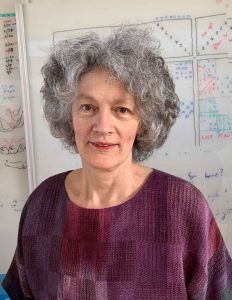 BACKSTORY: Belinda is a quiet, understated person with a wicked sense of humour which I love, and an individual approach to her weaving practice. I’m not quite sure when we first met but I went up to weave on Belinda’s TC-1 in 2009 in her studio in rural Aberdeenshire (NE Scotland) which I think was my first personal introduction to a TC-1. If I tell you that Belinda’s particular passions in weaving are jacquard (TC2) and tablet weaving on an inkle loom, you will get the idea of a person who does not get easily pigeon-holed! She continues to explore the craft, loves problem solving and sharing what she discovers through studio classes, workshops and online mentoring. It is fascinating to read her story of how she got caught with the weaving bug….

I was born into a household with a loom. My Welsh mother collected sheep’s wool from walls and hedges in Northumberland in the post war years of clothing coupons (clothing was rationed in the UK from June 1941 – March 1949). I recently learned from ‘This Golden Fleece’ by Esher Rutter that it was a recognised economic activity for poorer women in Wales in the 19th and early 20th centuries.

During clothes rationing everyone had a book of 66 coupons for a year. Coats needed 16, jackets 13, trousers eight, shirts five, shoes seven and underwear eight. In years of shortages people only got 48 coupons, and from September 1945, only 3 coupons per month.

After the end of rationing my mother maintained a frugal approach, gathered wool, got hold of cochineal beetles and Ethel Mairet’s book ‘Vegetable Dyes’.  My resourceful father spotted a spinning wheel serving as a model for a jacket in the window of Burton the Tailors in Newcastle. He inveigled a friend to try the jacket on. My father lurked outside with pencil and paper making notes, and went on to make a spinning wheel I now have. I doubt Burton’s got a jacket sale. 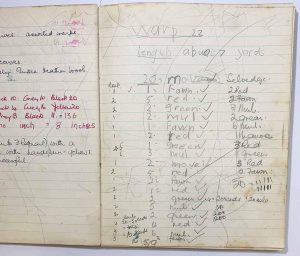 In 1951 the family acquired a Douglas Andrew 4 shaft table loom from Kent, (£11.6s.10d including book and carriage). My father added stand and treadles, enabling my mother to weave ties, gift scarves, cot blankets and yardage. She kept meticulous notes (notebook 13s. 6d). Her second warp was ‘unpicked knitted tweed wool…not strong enough, many broken threads’. Warp 9 was a 7 yard length in cheviot wool for a jacket for my father. The last entry, warp 22, sadly undated, starts in my brother’s juvenile script. He must have written down the colours in the order my mother dictated as she made her warp. She followed her colour instinct, not a written plan. This sounds like her. Note idiosyncratic youthful spelling. Could my brother have been 5? If so, I was on the way, no more weaving noted.

My first memory of her loom must have been at about 7 years of age, standing shafts akimbo much unloved in a corner. My mother found more spontaneous creative outlets, I’ve no memory of ever seeing her weave. 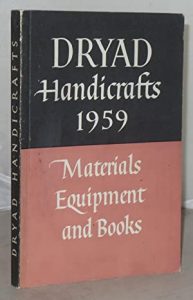 At about the same time, memory has me lying in front of the fire, engrossed in the ‘Dryad of Leicester Catalogue of Handicrafts’. It was a beauteous thing full of black and white silhouette drawings of tools and materials. I’d love to see one now. I drooled over scraper board tools, hammer heads, chisels, planes, they even showed differently sized nails and screws, the drawings making them highly covetable. What’s this –  a page of looms! Now this was something I knew could be used. They looked like toys, and beautiful. And, oh yes, I wanted one. Very much. Some things don’t change.

I wanted one so much, I couldn’t bear the thought of asking and being denied. After all we had a loom, surely I could use that. I don’t imagine my feet would have reached the treadles. I preferred to live with the dream of possibility.

Later, working in Newcastle, walking in Northumberland in free time, I began gathering wool myself. I made a spindle out of potato and stick, then my father made me a wooden one. Sometime around this I met my mother-in-law-to-be. She talks of a tall girl at a weekend spinning class, so enthusiastic to spin a longer length of yarn before winding onto the spindle, she climbed onto the tops of the tables. Oops.

Still hankering after a loom, I put one together using a bed frame and twine, a backstrap effort allowing me to weave handspun vegetable dyed fabric, sitting on the floor with legs out, pushing the frame away with my feet. I remember the first piece I wove. I gave most of my early weaving away, although they say we should keep these pieces as evidence of later improvement.

Comfortable this loom was not. I moved to Leicestershire and attended a double weekend workshop taught by Mike Halsey at the Handweavers Studio and Gallery in London. I was hooked, and struggled home dragging a Harris 4 shaft loom through the underground and train. I got to know a young woman my own age working for Dryad. They were publishing a new spinning and weaving catalogue and asked if I could provide some showcase items for it. They are mostly my mother’s knitting from handspun Jacob fleece.

My father made three spinning wheels, and never made a loom, nor did I ever ask him to.

I have acquired and let go many looms – they all became friends and went on to befriend others. They were all so full of potential, I loved and love them all.