How I Got Into Weaving – Ann Richards 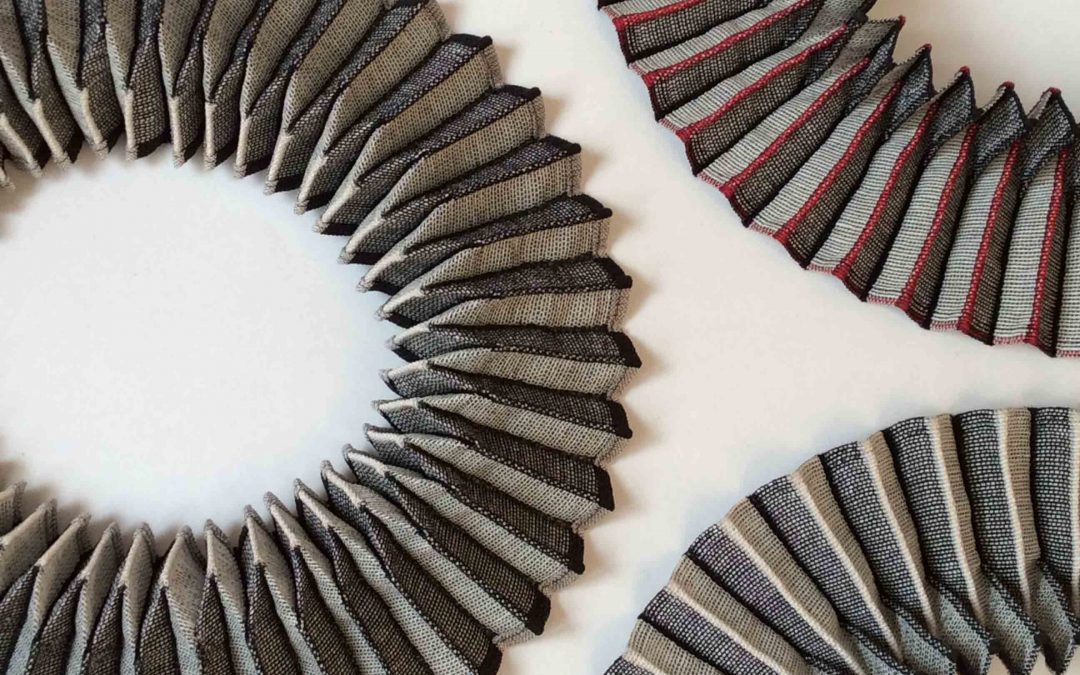 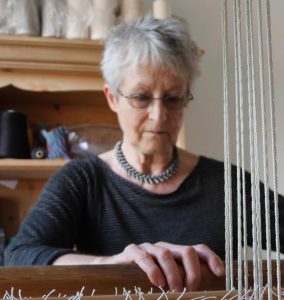 BACKSTORY:   Ann has been a part of my weaving life from the almost the beginning – certainly in my second year of weaving I remember picking up a book co-authored by Ann Sutton and Diane Sheehan called  Ideas in Weaving and seeing a lovely handwoven scarf in cashmere and silk by Ann Richards using selvedge fins occurring at intervals across the width of the cloth. This intrigued me and I was determined to work out how it was done. I managed with 4 shafts, although I have to say it was a painfully slow sample to weave. Years later I was talking with Ann during an exhibition of her work old and new in Handweavers Studio in London and I found out that she had used 8 shafts to weave it. No wonder it had been difficult!! Ann has studied high-twist yarns and collapsing fabrics for many years, translating Lotte Dalgaard’s Magical Materials – in Weaving and then writing her own book Weaving Textiles That Shape Themselves in 2012. She has introduced so many weavers to the magic of high-twist yarns and pleating fabrics. This is her story of her weaving beginnings.

I first got into weaving rather indirectly, by taking up metalwork. I trained originally as a biologist but while I was working as a technician at the Centre for Science Education in London I decided to attend some evening classes at a wonderful place called the Brixton Institute that ran classes on a wide range of subjects. As someone who had been at a girls’ school in the 1960s I had done some needlework and embroidery and even woven a couple of small table mats on a rigid heddle loom, but had no opportunity to work in either wood or metal – in those days these weren’t considered to be subjects for girls. So I decided to go for metal and signed up for the silversmithing class. I followed this up with a basic jewellery class and then a more specialist course in enamelling.

I think the enamelling tutor was probably also teaching at one of the art colleges in central London because he often turned up a little bit late, so while we waited for him we all wandered round looking at the other classes, one of which was weaving. Well, I definitely wasn’t going to take that up – I’d already decided to get away from ‘girly’ stuff like textiles in favour of something a bit more robust like bashing bits of metal. But, of course as I looked more closely at what they were actually doing I began to see that weaving was robust, but in a different kind of way – understanding the subtle interplay between material and structure required quite a bit of rigour. I signed up for the weaving class. 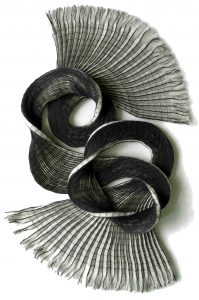 For a while I was quite happy weaving in my spare time but eventually began to feel I would like to take things further. I went on a summer school at West Surrey College of Art and Design (now the University for the Creative Arts, Farnham), working with Mary Restieaux on ikat. Mary saw that I was really serious about weaving and encouraged me to apply for a full-time course at the college and I was there from 1984-87. I arrived with a ready-made problem – why do narrow stripes of 1/3 and 3/1 twill sometimes spontaneously pleat up? This was something that had happened to me when I was just trying to weave a flat fabric.

My tutor Amelia Uden encouraged me to investigate this problem systematically and that is how I first found out about yarn twist and its possibilities for creating strongly textured fabrics. The reason for my unexpected pleating was that I had been using my own unbalanced handspun yarn as a weft, not realizing that it would shrink and combine with the warp-float/weft-float structure to create the effect. Once I understood this, working with textured effects became my main focus at college and has been ever since. So, in a way my whole career as a weaver has been based on a beginner’s mistake. 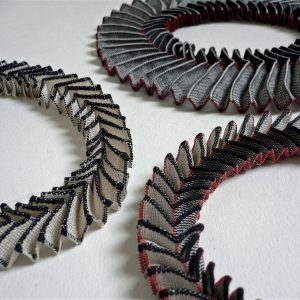 Although initially I mainly made scarves and shawl, plus a smaller number of garments, my work gradually evolved. After the soft pleating of the 1/3 and 3/1 twill I moved on to sharper-edged accordion pleated scarves and these in turn led on to the idea of pleated neckpieces. I really made progress with these once I joined the Danish Yarn Purchasing Association and gained access to quite unusual yarns, including a silk/steel yarn that has interesting intermediate properties between textile and wire, giving it a ‘memory’ for folds that are additional to the natural pleats produced through yarn twist. This yarn proved to be perfect for the pleated neckpieces and bracelets that I wanted to make, so in the end my life as a maker came more or less full circle as I started to make pieces intended to be worn as jewellery.