Underneath the Arches /Cloisters at La Romieu 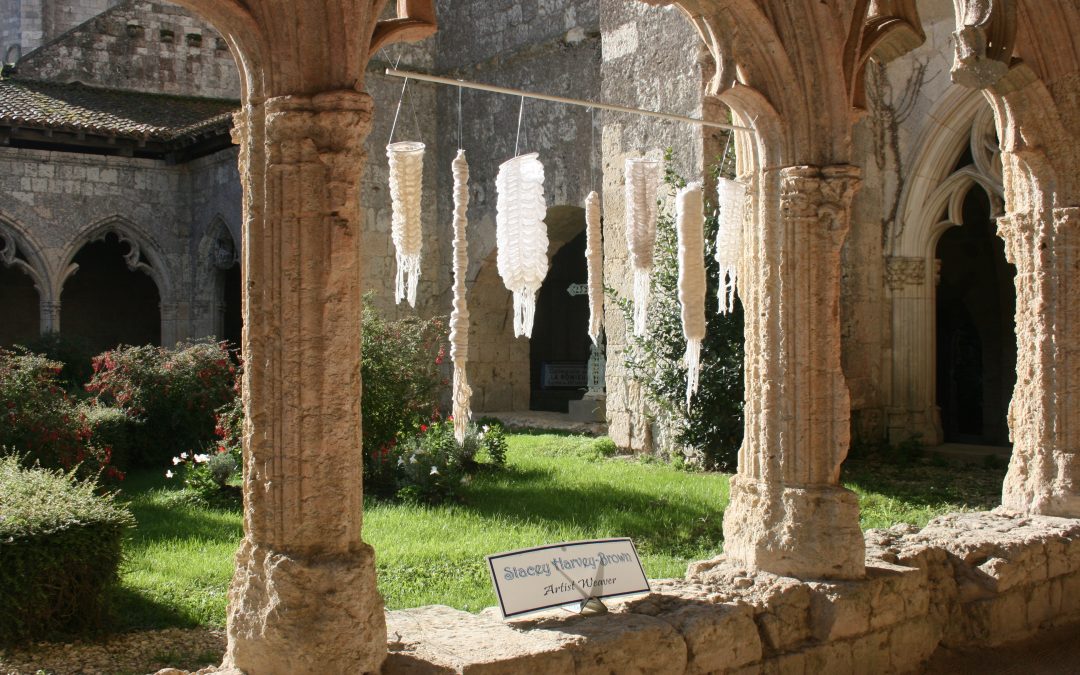 What a wonderful weekend has just passed!  It may have rained – a lot! – and blown a bit of a gale from time to time, and also had us reaching for the woollies and puffa jackets, but the visitors turned up and the atmosphere was fabulous!!

It was Journées du Patrimoine – Heritage Days – all over France this past weekend, when 17,000 museums and public buildings were opened up to the public for free, and artists and artisans came out of hiding to show how art, sculpture, and artisan crafts are created/repaired.

I was fortunate enough to be invited to join with Bleu de Lectoure and Agnes Busnel as guest artists of Métiers d’Art en Gascogne and the Marché de Potiers at La Romieu, a gorgeous stone village with a C14th church and cloisters in the northern part of the Gers, near to Lectoure.  La Romieu is famous for its stone statues of cats everywhere, as well as the real things wandering round the streets.  It is also on one of the many routes on the St Jacques de Compostella pilgrimage trail and is a thoroughly charming spot to visit.  Pilgrims popped in to see us before setting off on their trip south to Condom, or after arriving in the village in the afternoon after their stretch from Lectoure.  A lot of English was heard!

On Saturday, we had lovely weather and my small Growth Forms caught the sun beautifully, contrasting stone and textile, earth-bound and wind-blown. 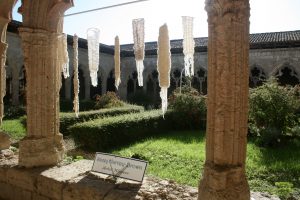 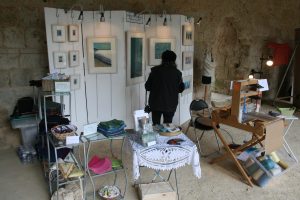 The uneven earth floor of the cloisters was a challenge for several artisans, but we are an inventive lot and found different ways to level things up a little!  My stand, which Graham had made for me several years ago, was used to the even floors of indoor venues such as the Pavilion at Buxton, but it stood up well to its new situation.

Artists and artisans everywhere are a social lot – once out of the studio!  However, one of the things that is so different from the UK is how the artisans all gather together for lunch, with contributions from each of wine, foie gras, paté, bread, soup, and lemon meringue pie!!!! Everyone downs tools and comes together to share food, drink and conversation!  It is lovely and a really bonding experience!

I confess I was a little worried about whether my language skills were up to talking to people in French for two days about weaving, but I needn’t have worried.  People were so kind and patient with my erratic sentences, and I learnt quite a few new words, one of which is abat-jours – lampshades.  Somehow the French word has a much nicer sound to it!!

I spent the two days weaving a scarf on my new-to-me 16-shaft table loom from Holland.  It was a good way to test out this lovely little loom which has needed a bit of tender loving care to make it work better.  I decided to run a ‘Win The Scarf’ competition and invited people to select yarns from a collection I had previously chosen to go with the colours of the scarf.  Their selections were then woven into the scarf as the weekend went on, so it became a joint collaboration with the visitors.  They also got the opportunity to put their name and email address down to win the scarf that was being woven.  The response was really good!  The lucky winner was drawn out at the end of the weekend, and will soon be delivered to its new owner who lives in Condom.

This was my first ‘exposition’ in France and it was lovely to meet some of the artisans in this area.  It was fabulous to have met the Bleu de Lectoure team and their studio will now be a scheduled visit for my students on one of our afternoons out.  I am also looking forward to working on a few collaborations with them over the coming years!

A few weeks of teaching to look forward to and the ongoing development of new work!!  Lots to keep a woman out of mischief – for a while, at least….!

There are some more photos of the event on my Facebook page along with Bleu de Lectoure and Agnes Busnel.